Traditional Irish Soda Bread is a dense yet deliciously soft bread made with only four ingredients, it is ready in only one hour from the time you mix to when you pull it out of the oven. 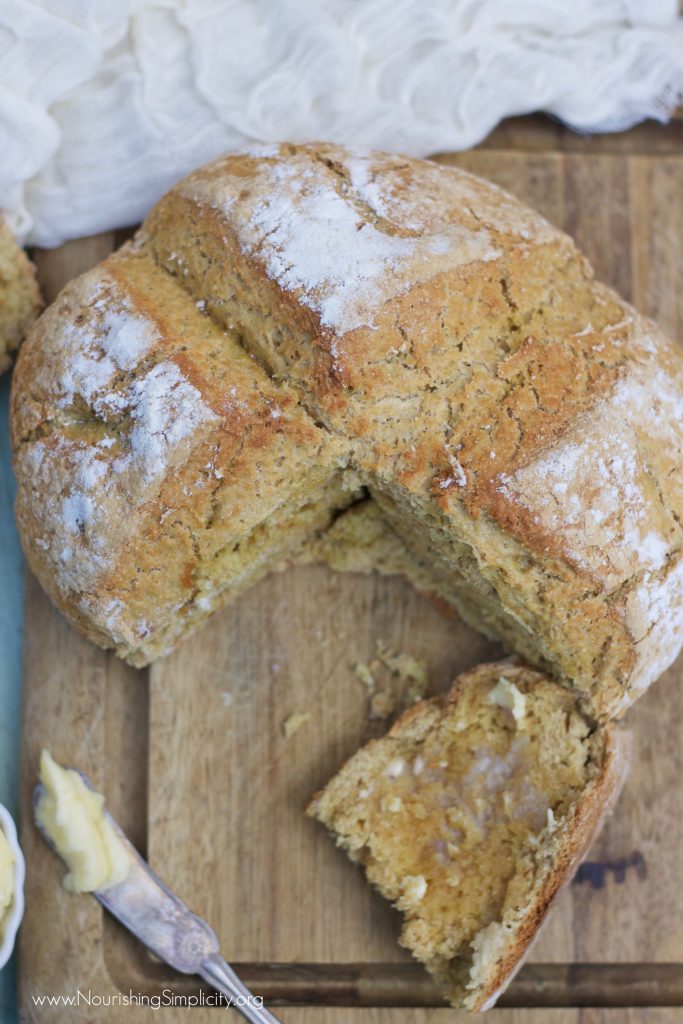 How does a loaf of whole wheat bread that is ready in less than an hour sound?

Impossible? Too good to be true?

Hardly, Traditional Irish Soda Bread is a humble favourite that goes from mixing to sitting on your table in less than an hour!

It is perfect for the day when you want homemade bread but don’t have hours to let it soak or sour and rise. Soda bread was (and sometimes is) the daily bread of the Irish people for generations back.

Traditional Irish soda bread was the food of the common people. There were times when it was one of the dishes the Irish might have in the mid-1800s.

My mom remembers my grandma and great-grandma both making soda bread. I wish I could say that this recipe was handed down to me through the generations from my great-great grandparents that immigrated here from Ireland but it’s wasn’t.

The recipe is so simple, that you barely need one! Traditional soda bread has only 4 ingredients.

Back in high school, I was on the school paper, I wrote an article about what do you think? Soda bread. It seems that I’ve come full circle since writing that article 15 years ago.

While the Irish gave the bread it’s fame they aren’t the original creators of this quick bread.

Soda bread calls for sour milk (clabber) or buttermilk and baking soda. The chemical reaction that occurs when the two combine is what makes this bread rise.

The Native Americans were known to use pearl ash, a nature soda made from wood ash, combined with an acidic acid to make flat cakes cooked on hot rocks prior to 1800. People started making quick bread like this one in the early 1800s thanks to commercial baking soda showing up on the market.

While other parts of Europe often made bread from hard wheat flour which uses a sourdough starter (and now commercial yeast) to rise, soft wheat grows best in Ireland’s climate.

Soft wheat is used to make pastry flour, it naturally contains less gluten, making it hard to bake the bread that most of us are familiar with.

Think of all of the green pastures we associate Ireland with. That meant that there was lots of pasture for cows to graze on. Until more recent times people didn’t pasteurize their milk or have refrigeration. Raw milk turns to sour milk, or clabber when it is not kept cold or ages.

An abundance of sour milk and soft wheat on made soda bread logical to make. Aren’t you glad that they did?

Most of the time the baked goods I share on this site call for a soaking step. Grain is more easily digested and the nutrients absorbed better into the body when you soak the dough or make sourdough. Traditionally soda bread does not call for a soaking time, so I left that step out.

Sometimes it is okay to have grace on yourself and simply enjoy food for what it is without stressing out about the preparation method.

You could try replacing the whole wheat flour with sprouted whole wheat flour. The texture will be a bit more crumbly but still tasty. I have yet to do this but plan to try it out once I start sprouting my wheat again. 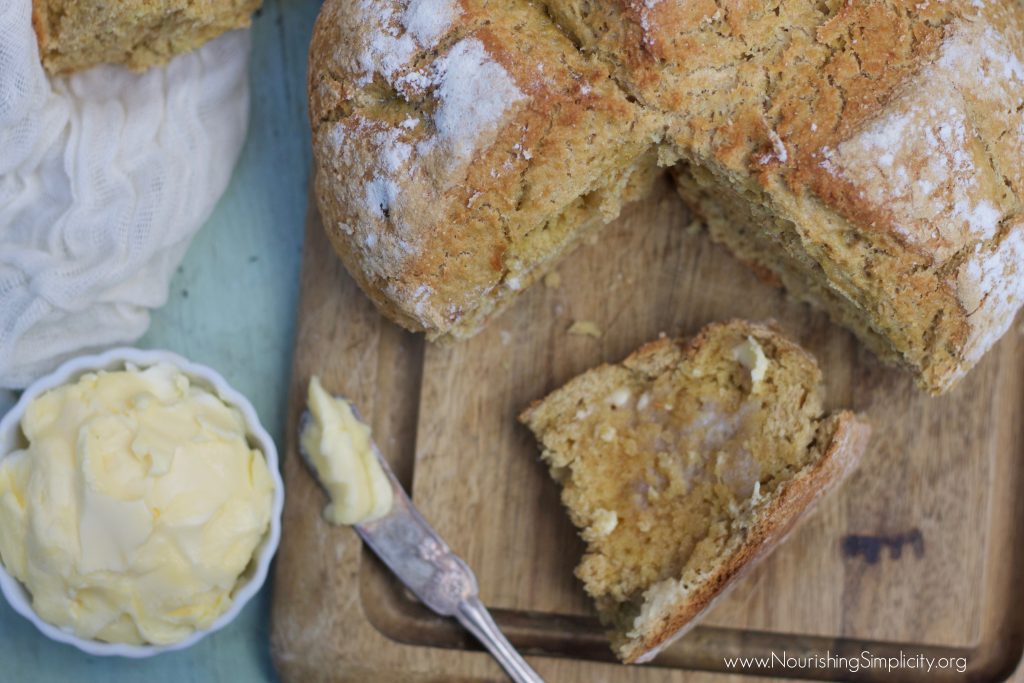 What about other variations?

There are a few variations of soda bread.

White bread– made from all white flour.

Soda Faral– griddle bread made in Ulster, a region including part of both Ireland and Northern Ireland.

How to shape soda bread

You probably have noticed traditional soda bread’s signature cross shape. Cutting a cross into the bread is called “blessing the bread”, many believed that it would ward off the evil spirits who wanted to keep the bread from rising.

Pricking each of the quarters of the bread is said to “let the fairies out”.

In all practicality slashing the dough allows for the heat to penetrate the center of the bread, creating a better rise. I tend to think that the fanciful story is fun.

How to store soda bread

Traditional Irish soda bread tastes best if it’s eaten within a couple of days of being baked. Wrap it in a bee’s wax cloth or use a zip-lock bag to store it. Keep it in the refrigerator for up to a week or freeze for up to two months. 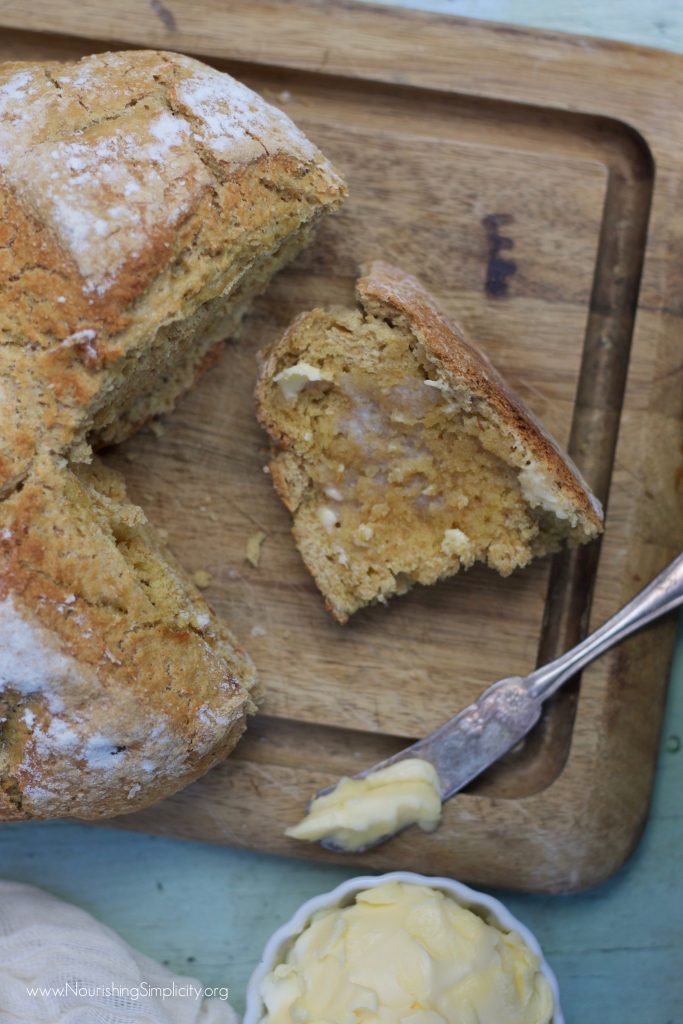 This recipe was adapted from one in Darina Allen’s book Forgotten Skills of Cooking. It goes perfectly with a hearty stew or shepherd’s pie, slather a slice hot from the oven and you are good to go! Or you can cover a slice with a bit of butter and jam and enjoy it with a cup of tea.

My soda bread technically has five ingredients because it calls for whole wheat and unbleached white flour but the essence of the recipe is still the same, flour(s), clabber, baking soda, and salt. 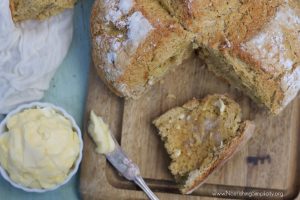 Previous Post: « How to Make a Simple Vinegar Based Floor Cleaner Concentrate
Next Post: 6 Simple Pleasures that You Can Savor Every Day »