Are you tired of the boring traditional vegetable soup? Give this savory red pepper and fennel soup with sausage a try! You will be surprised by an extra hidden vegetable. 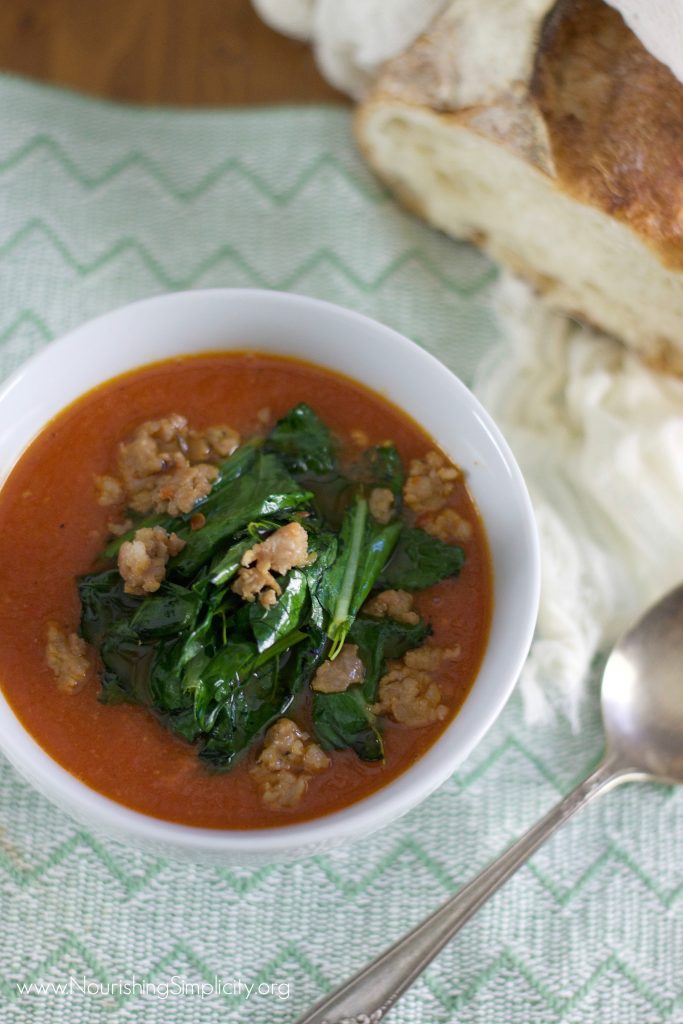 Do you want to impress your friends when you have them over to dinner? Make this soup.

Do you want your family to eat more veggies? Make this soup.

Do you simply want to have a bowl of tasty goodness? Make this soup.

Vegetable soup has never been at the top of my list for soups I like to eat. In fact, it is close to the bottom of ones that I simply tolerate. Things like clam chowder don’t even make the list…

That all changed one day when I had my first bit of this savory red pepper and fennel soup with sausage, it altered the way I look at vegetable soup. It has changed my life. I’m not even joking. I garden differently now because of this soup. LIFE CHANGING!!

The three key ingredients? Red peppers, fennel, and sausage. Those three, unassuming ingredients marry together to create one of the best soups I have ever eaten.

I now have fennel, kale, and Swiss chard growing in my planter boxes. I could grow carrots but when Costco sells organic ones for less than $5 for a 10-pound bag it’s hard to compete. Just for fun, I grow onions and garlic too but I’m fully aware that my limited space isn’t sufficient for the massive quantities of onions and garlic that I go through in a year.

So, I can’t take full credit for this soup because it was inspired by a recipe in a magazine from Costco that I read a couple of years ago at my parents’ house. Once I see a recipe that I think sounds good, I tend to remember the ingredient list pretty well. Facts for a test. Not so much… 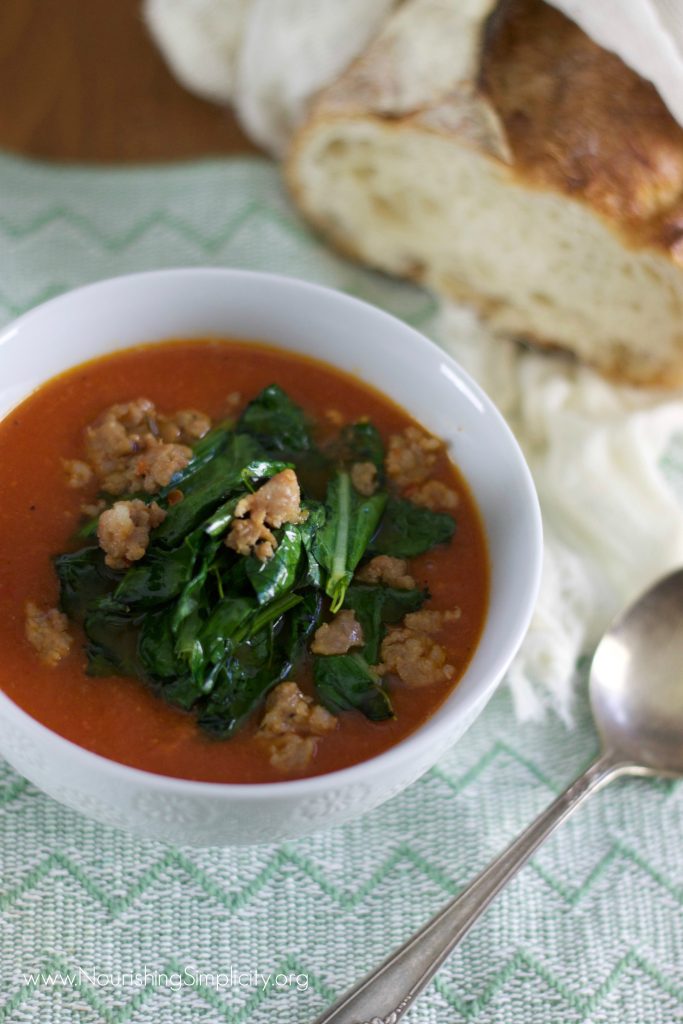 This soup is one of those recipes that seems like it is going to be complicated but it’s not. You can make this dish and have it on the table in less than 45 minutes including prep and simmering time.

While it is simmering there is time to make toast bread with garlic butter and make a salad if you want more vegetables in your meal.

This simple soup is layered with flavors. Each builds on to each other. Tomatoes (I use Jovial jarred tomatoes), carrots, and red pepper add a mellow sweetness. Fennel brings a hint of licorice, yet you would not know it is there. Sauteed swiss chard or kale add the finishing touch for a contrast of color, taste, and adds one more vegetable to the list.

Savory red pepper and fennel soup with sausage is now, one of my go-to meals when I have company over. (Even as an introvert I enjoy it.)

Serve with a quick rosemary focaccia or a rustic sourdough with garlic butter. You can serve the soup with salad as well if you want to add a fresh element to the meal.

Buy red bell peppers in bulk when they are on sale. Slice and freeze them in a single layer on a tray. Once they are frozen, remove and place the amount you will need for this or other recipes in freezer safe bags.

Buy a large bag of peeled garlic cloves from a store like Costco. If you don’t think that you can go through the whole bag before it goes bad, keep some in the fridge and then freeze the rest.

Take out however many cloves you need for a recipe. Leave them out for five minutes to thaw while you are prepping other ingredients, then crush or mince for your recipe.

You won’t notice a difference.

Not peeling garlic is one simple step to minimize work and mess in the kitchen.

While you can make do without these, they are two tools that I use all he time in my kitchen. 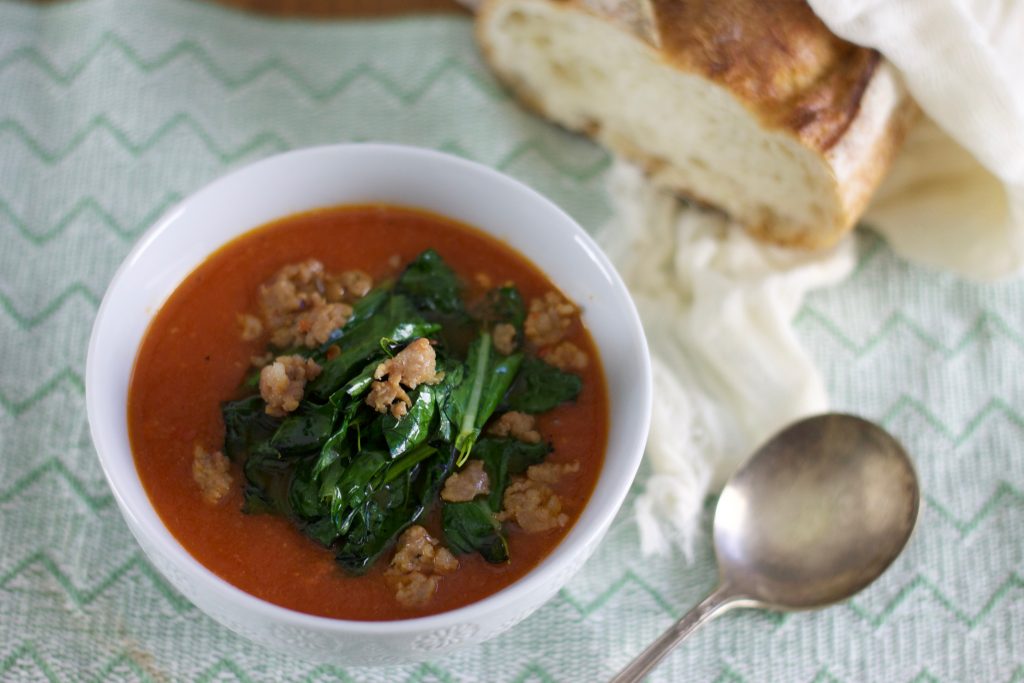 1. In a large pot, (I prefer to use a 6-quart cast iron enameled Dutch oven) cook the sausage over medium heat. Stir occasionally to break up the sausage to cook evenly. Turn off the burner. Once it is cooked through, remove and set aside.

2. While the sausage is cooking, roughly chop the onion, fennel, red bell peppers, and carrots. Once the sausage is removed, pour one tablespoon of olive oil in the pot, add the vegetables and the garlic. Return to medium heat, cover with a lid. Stir every few minutes to prevent burning, this should take about 10-15 minutes.

3. Once the vegetables are soft, add the chicken broth and tomatoes. Blend until smooth using an emersion blender. Optionally allow the soup to cool until warm and blend in small batches in a regular blender.

4. Once the soup is smooth, simmer for 20 minutes, stirring occasionally.

5. While the soup is simmering roughly chop the chard or kale, remove any large stems if necessary. Saute in the remaining 1 tablespoon of olive oil over low heat until the greens of choice are just wilted. 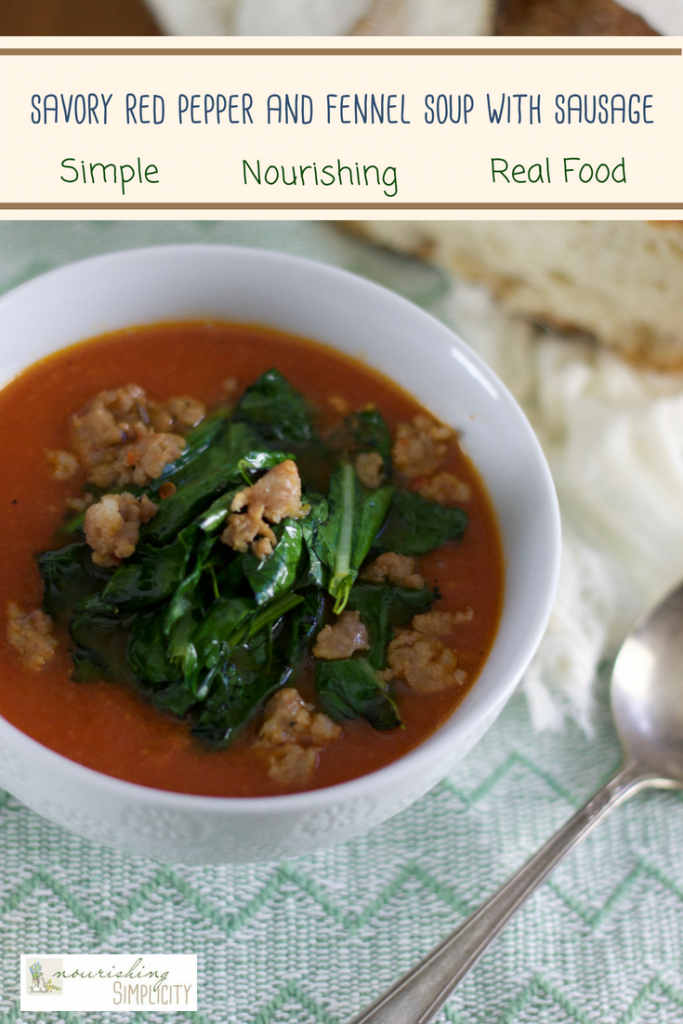 Previous Post: « 10 Ways to Embrace Hygge This Spring: Coziness is Year Round
Next Post: How to Make a Real Food Triple Mocha Fauxccino »